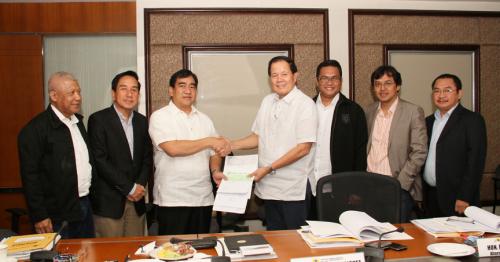 DPWH Usec. Romeo S. Momo (3rd from left) receives from PPA Board Chair Julianito G. Bucayan the check amounting to P20 million to help finance the rehabilitation of Yolanda-ravaged areas as PPA General Manager Juan C. Sta. Ana (2nd from left), Marina Deputy Administrator for Planning Atty. Nicasio Conti (3rd from right) and other members of the Board look on.

Latest data showed that net income reached P4.87 billion in the January-October 2013 period or about 58.2% higher compared to the P3.08 billion registered in the same period of 2012.

According to PPA General Manager Juan C. Sta. Ana, the rise in net income was due to the constant decrease in the total expenses, which has been dragging the agencies revenue generation measures the past couple of months.

“The hike in net income only shows that the agency is reaping the benefits of reduced red-tape at the agency as well as transparency in operations,” Sta. Ana explained.

“We are reaching all-time highs in terms of increases in net income and I am very optimistic that this performance would carry over not only in 2013 but also this 2014,” Sta. Ana said.

“With the hike in net income, the agency was able to donate P20 million through the Department of Public Works and Highways (DPWH), to be used for the rehabilitation for Yolanda-ravaged areas,” Sta. Ana added.