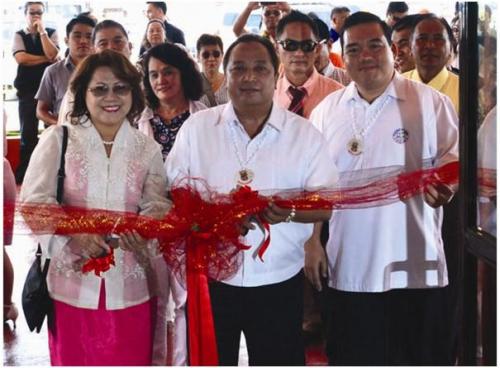 NOVEMBER 6, 2015—The Philippine Ports Authority (PPA) has formally inaugurated its spanking new Passenger Terminal Building (PTB) in the Port of Tagbilaran to respond to the growing tourism traffic in the region. The Port of Tagbilaran is the main gateway to and from the province of Bohol. It also sustained severe damages when the 7.1 magnitude quake rocked the province in October of 2013.

According to Tagbilaran Port Manager Annie Lee Manese, the new PTB is government’s answer to the increasing number of tourist arrivals in the area particularly the hike in the number of cruise ship arrivals the past couple of months.

“The new PTB is a symbol of PPA’s commitment and strong support to Bohol’s bid for tourism destination and commerce,” Manese said.

“This is a major upgrade compared to the old PTB, which we demolished after it was badly destroyed by the earthquake in 2013,” Manese added.

“With this new facility, our passengers are expected to receive convenience, comfort and security in their travel to and from Bohol,” Manese stressed.

The 2-storey P57-million facility, which was constructed by Dakay Construction and Development Corporation, sits on a 1,900 square meter land with a seating capacity of 500 passengers and is equipped with X-ray machines, nursing rooms, Ballistic Exam Room, prayer room and other amenities. This is also expected to be at par with the North Port in Manila, which is considered as the the yardstick of the country’s PTBs.

Aside from Bohol, the PPA is also undertaking several more improvements and refurbishments to PTBs to guarantee convenience of passengers while they are at the ports.