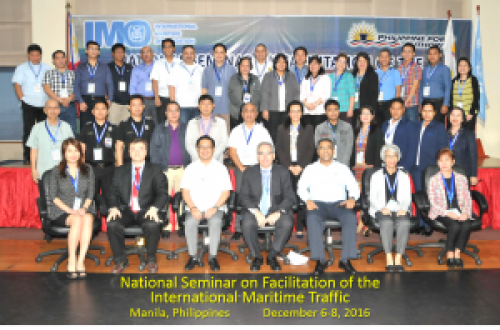 DECEMBER 8, 2016, MANILA—The Philippines, through the Philippine Ports Authority (PPA), is reigniting plans to adopt the Facilitation of the International Maritime Traffic Convention of 1965 or popularly known as the FAL Convention.

The PPA led the crafting of the ratification papers in 1996 with the Philippine Coast Guard, Maritime Industry Authority, the Department of Foreign affairs, among others, for the convention but has not been ratified in Congress the past two decades.

“This IMO undertaking is highly significant for all of us in the maritime sector since its successful completion will pave the way to re-igniting the long overdue process of the Philippine ratification of the IMO FAL Convention by Congress,” Santiago stressed to stakeholders during the seminar.

The FAL Convention was adopted by the International Conference on Facilitation of Maritime Travel and Transport on 9 April 1965. It entered into force on 5 March 1967. Currently, the number of Contracting Governments to the Convention is 117 wherein the combined merchant fleets of which amount to approximately 93.18% of the world's fleet by tonnage. There are 54 Member States of the IMO, which have not yet acceded to the Convention including the Philippines.

The purpose of the Convention is to facilitate maritime transport by reducing paper work, simplifying formalities, documentary requirements and procedures associated with the arrival, stay and departure of ships engaged in international voyages.

The Kuala Lumpur Transport Strategic Plan (KLTSP), meanwhile, aims to support the realization of the vision of the ASEAN Economic Community (AEC) 2025, which calls for a deeply integrated region that will contribute towards a highly cohesive ASEAN economy. The KLTSP was developed by the members of the Task Force on the Development of Successor ASEAN Strategic Transport Plan through consultation and with the inputs from the ASEAN Secretariat and all working groups, and sub-working groups under the ambit of the Senior Transport Official Meeting. The KLTSP has been built upon the achievements of the Brunei Action plan 2011 – 2015.

“PPA, as lead agency of the Port Facilitation Committee, will continually endeavor to keep its doors open in discussing varied issues and concerns in our common pursuit to further improve services in our operations for the benefit of our transacting public and clients,” Santiago added.